For the untrained and uninitiated, Cobra Kai is Netflix’s television reboot of the classic Karate Kid franchise. The series shows the two rival characters of the first film—Johnny Lawrence and Daniel LaRusso—all grown up and mentoring the next generation in their own dojos. While the story originally began airing on YouTube Premium, it’s found massive success and a cult following since moving to Netflix. If you’re debating getting into the show, or even if you’re already deeply invested in the rivalry and waiting for more episodes, here are five things to keep in mind when setting off on your Cobra Kai binge watch.

1. The series offers a new perspective on The Karate Kid story—one where Daniel LaRusso isn’t quite so heroic.

One of the best things about Cobra Kai is the way it interacts with the source material. It would be easy enough to continue The Karate Kid story along the same path. Historically, though, that hasn’t gone over well. Just take a look at The Next Karate Kid (1994).  What makes Cobra Kai so interesting is the way that it reinterprets the original franchise. Instead of focusing on Daniel, the show zeroes in on Johnny, exploring how his experience at Cobra Kai damaged him and affected the rest of his life. When he reopens the dojo, he vows to do better for the next generation of fighters.

Not only does the series humanize Johnny, but it gives a different point of view on Daniel. While the movies portray him as the underdog hero, the series points out that he’s petty, argumentative, and hard-pressed to believe the best in people. It’s an important reminder that life is rarely black and white; everyone is the villain of someone’s story.

2. You may have How I Met Your Mother to thank for Cobra Kai.

Yeah, you read that right. Apparently the creators of Cobra Kai were inspired How I Met Your Mother Season 8 Episode 22: “The Bro Mitzvah.” A good portion of The Karate Kid‘s fanbase was already into the idea that Daniel was really a villain, but Barney Stintson took that idea and popularized it to the extreme. After a long-running gag of Barney’s love for the franchise, the Season 8 episode reveals that he always thought “the karate kid” was Johnny Lawrence. Ralph Macchio and William Zabka both make guest appearances in the episode, to Barney’s horror and delight respectively.

The popularity of the episode reassured the future creators of Cobra Kai that fans would be receptive to the idea of portraying Daniel LaRusso as a villain.

3. Cobra Kai features some of the most skilled martial artists in the franchise.

Behind the scenes, Cobra Kai has some of the most accomplished fighters out there. Tanner Buchanan plays Johnny’s semi-estranged son, Robby Keane. Prior to his acting career, Buchanan had pretty extensive experience in tae kwon do.  He picked up the hobby from his mother, who also had a serious interest in karate and is a certified black belt. He followed in her footsteps and was about halfway to becoming a black belt himself when he had to drop the sport to accommodate his busy schedule.

Buchanan’s purple belt makes him one of the actors with the most training in the Miyagi-verse, including both Macchio and Pat Morita, who played Mr. Miyagi himself.

4. While not all of the cast members had previous training in martial arts, a majority of them were skilled gymnasts or professional dancers.

One skilled martial artist does not a dojo make. Most of the cast had little or no experience in martial arts before joining the franchise, but that doesn’t mean they didn’t have their credentials. Producers and casting directors focused intently on candidates who had training in both gymnastics and in dance. On the surface, a kick-ball-change might not be the same as a crane kick, but it does speak to an actor’s physicality and their ability to learn choreography. Dancers routinely have to practice long, intensive sequences, stay on beat, and collaborate with other dancers to perform their moves. With all those skills in their arsenal, it made them great candidates for learning fight choreography for the more intense fight scenes.

5. Initially, Macchio and Zabka were both against the idea of joining the series.

Despite the show’s current success, the previous stars weren’t always on board with the idea of a reboot. Macchio has historically been very protective of the franchise’s legacy, and was hesitant to say yes after so many years of rejecting offers. For Zabka’s part, he wanted to make sure the story made sense for his character. After the toxic experience Johnny had at Cobra Kai, Zabka wasn’t convinced that it would make sense for him to reopen the dojo that had caused him so much trouble. It took several meetings and a lot of content ideation before the pair agreed to give the series a shot. Now, they’re thankful for the chance to connect with fans new and old.

This may be promising to keep in mind as the creators line up more cameos from the original franchise. There have been talks about introducing Hilary Swank’s character from The Next Karate Kid, as she was also a faithful student of Mr. Miyagi’s. While they haven’t approached Swank with an offer yet, some fans suspect that she’d be hesitant to return to the role after her previous experience. But now that Zabka and Macchio have gotten over their reservations, maybe they can convince her to make her own redeeming comeback.

If you’re a fan of Cobra Kai and The Karate Kid franchise, make sure to check out Loot Crate’s Limited Edition Cobra Kai Crates! The 3-crate series will have exclusive merchandise and apparel dedicated to each of the three focal dojos: Cobra Kai, Miyagi-Do, and Eagle Fang. Pre-orders are open now, with crates due to ship April 2022. 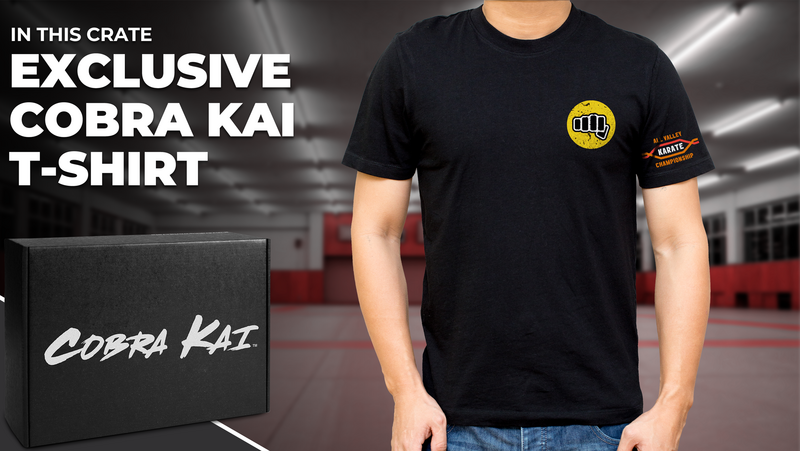 Jan 19th, 2022
© Loot Crate. All rights reserved.
Brought to you by the illustrious TDC staff with all the love they can muster.