E.T. stands as one of the most culturally impactful and greatest blockbuster films of all time. But do you know about the work that went into creating the film? Here is some awesome behind the scenes trivia that you may not have known!

The film sits as the number four highest grossing films of all time (after adjusted gross). During its 1982 run, the film made $435.1 million at the box office, which by today’s numbers would be $1.278 billion!

Much of the effects are practical including the famous flying bike scene. A background image of the moon was shot with an extremely long telephoto lens with bike models set against the backdrop.

Harrison Ford once had an appearance in the film

Most people don’t know that Harrison Ford actually filmed scenes that were cut from the film. He played the part of Elliot’s principal whose face in never shown. 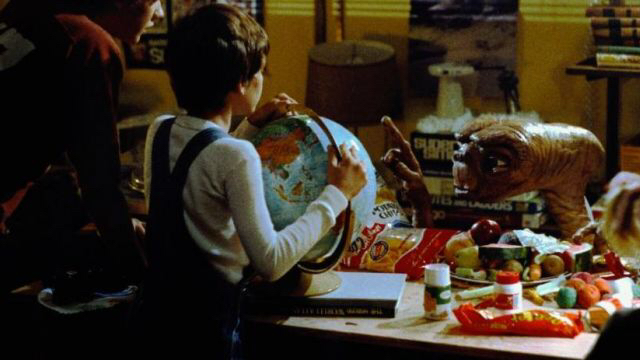 Originally Elliot was supposed to lure ET with M&Ms but the company refused to let them use their product. So Reese’s Pieces were used as an alternative. Spielberg went to great lengths to make the set feel as real as possible. He even asked that E.T. be treated as one of the actors and told Drew Barrymore (Gertie) that he was a real alien. He went so far as to make the visual effects department design and practice the puppet movements for the utmost amount of realism.

Henry Thomas’s audition for Elliot was entirely improvised. Instead of providing him the script, he was given a description of a scene in which a  government agent is taking away his alien best friend.

Spielberg felt the hand motions that initially used the mechanical arms looked too robotic and stiff. So he decided to hire mim artist Caprice Rothe to give the character a more realistic and natural movement.

Go “Intergalactic” with an EXCLUSIVE E.T. item in this month’s Loot Crate and Loot Crate DX!