Chances are, you’ve heard someone say (or made the argument yourself) “Superman is too powerful.” You’ve also probably heard some jokes about him not understanding the fundamental concept of underwear, but we’re just going to focus on that first issue today. Superman’s powers have actually fluctuated wildly over the years. Take a look!

The original “Superman” was a villain who made his debut in 1933. During the Great Depression, writer Jerry Siegel and artist Joe Shuster were high school friends who couldn’t seem to sell their stories to any publications. So they created their own short-lived fanzine called Science Fiction: The Advance Guard of Future Civilization. The third issue featured a short, illustrated story titled “Reign of the Superman,” a callback to Nietzsche’s Übermensch.

In the story, Professor Smalley, a mad scientist, chooses a man named Bill Dunn (who more closely resembles Lex Luthor than Clark Kent and whose last name was later co-opted for David Dunn in M. Night Shyamalan’s Unbreakable) from the bread line, offering him a “real meal and a new suit.” Smalley gives Dunn a potion, imbuing Dunn with telepathic powers. Dunn is overwhelmed by his new abilities and decides to use them for his own gain, murdering, stealing and ultimately trying and rule the world. But Smalley, being a mad scientist and all, was really just using Dunn as a guinea pig and intends to kill him, taking the powers for himself. That plan backfires when Dunn kills Smalley. The problem? The potions effects aren’t permanent. Dunn’s powers fade and he must return to the bread line. So, y’know, uplifting stuff. 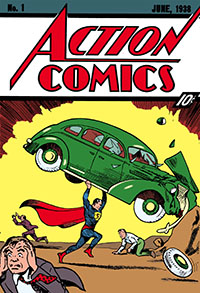 In 1938’s Action Comics #1, Superman was strong enough to pick up a car, could leap 1/8th of a mile, outrun an express train, and was mostly bulletproof. As what became known as the Golden Age of comics progressed, Superman’s powers increased dramatically. Superman started flying in the Fleischer cartoons of the early 1940s and would soon develop super hearing, x-ray vision, telescopic vision, and enhanced strength. By the end of the era, he officially had “heat vision,” could withstand an atomic blast, and fly faster than light. 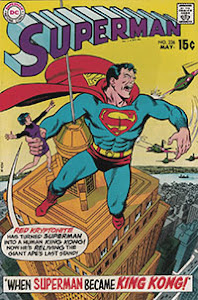 Superman’s powers continued to grow, as did his Super Family, adding members like Supergirl and Krypto. While many stories focused on expanding Superman’s world by introducing Kryptonian history (largely because Superman could fly so fast he’d go back in time), bottle cities and exciting new villains, many writers struggled to come up with new ways for the Man of Steel to be challenged. Thus, things took a turn for the absurd. Superman spontaneously developed abilities like super-ventriloquism, super-weaving, shooting tiny versions of himself out of his hands and other single-issue powers. Also, new colors of Kryptonite transformed him into strange things like an ant or a profoundly effeminate guy. 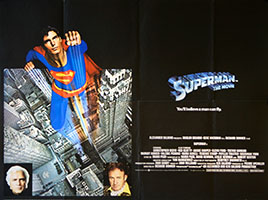 The next era of comics saw changes mainly come in the form of characterization. The Golden Age Superman had been a social justice warrior during the Depression and World War II hero; and the Silver Age Superman was more of a sci-fi adventurer. During the Bronze Age, Superman’s powers remained at a god-like level but his intellect grew. He was an explorer, a philosopher, scientist, and occasionally even a pacifist. Under the pen of Elliot S! Maggin, Superman contemplated whether he was holding back the progress of humanity. The films, starring Christopher Reeve, are really where Superman’s powers expanded, with weird things like wall-repairing-vision and super-cellophane shields as well as the infamous memory-erasing kiss. 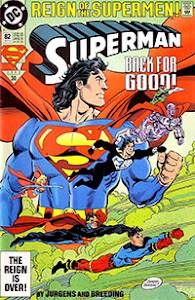 Following an event called the Crisis on Infinite Earths, the DC universe got a bit of a reboot. Superman’s powers reduced to just his core abilities like flight, speed, strength, x-ray vision, super hearing, and heat vision. His intelligence reduced to that of an average person and, though his strength was tremendous, it was far from limitless. He was even killed by a Hulk-like enemy named Doomsday. Don’t worry, he came back. With a mullet. John Byrne introduced the new concept that his powers were a result of a sort of forcefield around his body, which also explained why his costume was rarely damaged. 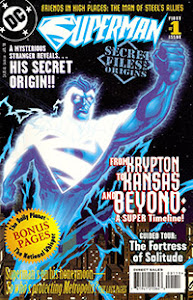 Superman frequently loses his powers. During one such event in the mid-90s, his abilities didn’t return quite as expected. You may’ve seen images of an electric blue Superman. These are not a joke (even if they were a terrible mistake). During this phase, Superman became a being of pure light energy. His powers were ill-defined during this period and, thankfully, he returned to his classic powers by the end of the decade. Following this, he slowly regained his super-intelligence and could see various spectrums of light. 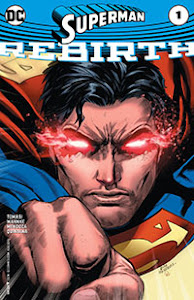 The DCU got another major revision in 2011, following an event called Flashpoint. Superman was shown at the beginning of his career, young and brash and back to his Golden Age power-set as he fought for social equality in Metropolis. Over the course of 18 issues, he gained the ability to fly, super-intelligence, and other less-insane Silver Age powers (except when he “read” the contents of a flash drive just by looking at it… that was crazy). However, the only “new” power came several issues later in the form of the “Super Flare” which was a massive, concentrated blast of heat vision that would leave Superman powerless for a couple days after using it. Ultimately, this Superman also died due to a combination of many factors including Kryptonite poisoning and was replaced by his Modern Age counterpart. So feel free to add “impervious to reboots” to that list.

(The text of this article appears in Loot Crate Magazine, January 2017.)